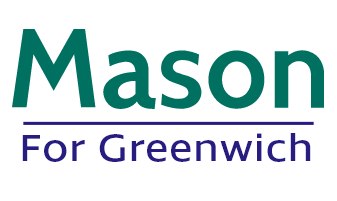 Get involved with the Campaign

Get all the latest news

Mason Outlines Plans for Greenwich at Campaign Kick Off

With a live band and hot catered food about 200 people turned out despite the rain.

Mason is the second Republican to announce his candidacy. Last month State Rep Fred Camillo announced his candidacy during an event at the Teen Center.

Back on Feb 1, six-term First Selectman Republican Peter Tesei announced he would not seek another term, and said he would work to assure the victory of candidates nominated by the Republican Town Committee.

Former First Selectman Jim Lash said he was proud to be Mr. Mason’s honorary campaign chair and said he had known Mason since the late 1990s.

Lash described Mason as always curious.  “He will talk to people any hour of the day or night to try to get their point of view,” Lash said. “I will tell you, it’s not unusual to hear something in the last few days of a debate that changes your view. And it’s handy to have First Selectmen who like being with people, like talking to them and hearing their points of view.”

Referring to Monday night’s RTM Sense of the Meeting Resolution discussion on tolls, and the close vote, he said Mason stayed to hear the entire debate and then stayed afterward to listen to people.

Lash said Mason’s 38 year career in the airplane industry is unique in that it requires close attention to detail. Mason owned the Westchester Aeronautical Corporation, doing businesses as the Million Air out of the Westchester Airport.

Lash also praised Mason’s 26 years as an elected official for the Town, only missing three scheduled meetings in all those years.

“My parents started off in Adams Gardens after World War II,” Mason said, describing his family’s roots in Town. “My father spent a lot of time later on in Nathaniel Witherell – for those of you who wonder why I have a huge support for our Housing Authority and our Nathaniel Witherell.”

He said back in 1991 he joined the RTM in District 8 after receiving his first tax bill. Later, he would be elected chair of that district three times.

In 2004 Mason was elected to the Board of Estimate and Taxation.

“There, things were a lot more challenging,” he said. “Decisions required immediate study.”

Mason next served three terms on the Budget Committee and became its chair.

Ultimately he would serve three terms as chair of the full BET. He is currently a member of the BET, where Democrat Jill Oberlander serves as chair.

“I think I’m uniquely qualified to be the next First Selectman,” he said. “I think I’ve gained a deep knowledge of every Town department, their operation and their budget.”

Also, he said, “As chair of the BET, I’ve worked collaboratively with the First Selectman, Board of Selectmen, fellow BET members and the RTM to respond to the issues of the Town.”

Back in 2008 during the financial crisis, he said the Town lost a significant amount of revenue.

“It wasn’t easy or pleasant, but we reduced spending without impairing services to the Town in any significant way.”

Then, he said, “We got calls from the credit rating agencies and said the Town of Greenwich cannot operate with a negative $17 million fund balance. …But it did work. Ten years later we enacted a fund balance policy and took that negative fund balance, and it is a positive $53 million today.”

“In my experience, serving on BET I’ve had the good fortune to interact with thousands of residents – members of the RTM, Town boards, concerned citizens …I’ve learned that to get things done you have to work across the aisle and work with all the Town bodies. I’ve done that and I’ll continue to do that as your First Selectman.”

Mason said Greenwich is facing challenges that stem from loss of state funds, and that although Greenwich’s taxes are lower than peer communities in Fairfield and Westchester, “The state is now threatening us with different taxes and potentially shifting unfunded pension liabilities to municipalities,” he said. “At federal level, the SALT deductions have had a negative impact.”

The candidate said efficiencies in Town government can be achieved through technology. “Every resident, contractor or vendor should need nothing more than something we have customer service for – whether somebody’s trying to get a parking pass, make a reservation for golf, get a building permit, get required documents for a house closing – it needs to be better. If we do this, the operating cost of the Town goes down.”

“Our Town infrastructure must be maintained and we must invest in those new facilities to keep Greenwich competitive.”

“We need to restore our capital improvement process, and apply it to all projects from the concept of the project to completion,” he continued. “We need a capital asset management system so we can track our projects.”

Mason said it is important to support and invest in Greenwich Public Schools because they draw families to Town.

“We must reinvent continuous dialogue between Greenwich’s decentralized boards and commissions. We have a very old style New England government.”

Mason said that on Day 1 he would ensure all employees have proper job certifications.

“We need to increase the value of our properties and make it so people want to come here. We want to exceed expectations. Taxing or charging more for the same services or even less – in my business that loses customers. For a town it loses residents, or future residents.”

Mason said he considers himself the best candidate for the job of First selectman. “I’ve been in training for this position for three decades,” he said.

“A lifelong Greenwich resident, Mike has served in all levels of town government, including the RTM, Parks and Recreation, and most recently 16 years on the BET, including as its Chairman. Under Mike’s leadership in the BET, Greenwich has maintained its strong financial position of low taxes while investing in the town’s infrastructure, such as educational facilities, emergency services, and support for our seniors. Greenwich is fortunate to have such strong Republican candidates willing to serve this town at all levels.”

Paid for by Michael Mason